I get commissions for purchases made through links in this article.

Previously, it was quite simple to choose a Samsung SSD but now it’s a bit tricky, due to more variants. The SAMSUNG 970 EVO is a little bit slower than the 970 EVO Plus if we look at the theoretical performance space.

However, there are no questions of reliability and other things. Both NVMe SSDs are reliable and durable, comparing each of them. But, this is the thing that makes this decision tough.

Both the drives are not inexpensive if you are looking to buy a 1 TB or higher version. So, a prior research is important. So, don’t worry. I have done everything for you. Just go through this article and you will surely find it easy to make the final decision without any issue.

Comparing the features of both, it’s pretty clear that Samsung 970 EVO Plus dominates the 970 EVO model. Let’s explore the difference between both Samsung SSDs.

Note: If you’re intending to get an SSD for effective Read/Write speed 2 TB is the best choice. The higher variant includes impressive R/W speed. Before, investing in any NVMe SSDs consider the actual need, later on, proceed ahead to make a purchase.

The company says that these speeds are achieved through Samsung’s TurboWrite technology.

The Read Speed for 250GB/500GB/1TB is the same 3400 MB/s Whereas, the 2TB variant includes better Read Speed 3500 MB/s You can see an increasing Write Speed depending on the higher variant.

The Read speed is stable for all the Samsung 970 EVO Plus Variants up to 3,500 MB/s. Whereas, the Write Speed increases as the capacity increases.

Note: The Stated Read/Write might differ (Increase/decrease) depending on Operating System and your system’s processor.

I have done these tests using CrystalDiskMark 8. The system configurations are Intel i5 8th generation with 8GB 3200 Mhz RAM.

Above mentioned Tera-Bytes Written are common for both these SSDs. More, TBW indicates a better lifespan. Samsung NVMe SSDs are reliable & durable products. So, there are no issues with the same at all with any of these SSDs.

Note: The Mean Time Before Failure (MTBF) for both NVMe SSDs is 1.5 million hours. Reliable Lifespan period for a Solid-State Drive.

Bus Type/Form Factor: The form factor (interface) for both NVMe SSDs is M.2. The interface is PCIe 3.0 x4. And the protocol is NVMe 1.3.

Controller: Both SSDs are using Samsung’s own Phoenix controller.

Controller Type: Both these SSDs are using the same Samsung’s Phoenix Controller. The configurations of both are Penta-core, 8-ch, 8-CE/ch.

What is the warranty period for these SSDs? 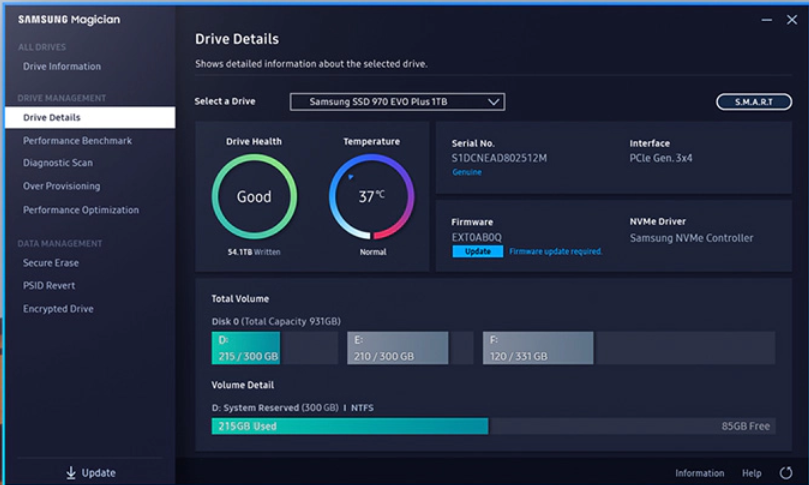 What are my Views on both (Which one should you buy?)

It’s a better choice to invest in Samsung 970 EVO Plus because it’s the best in terms of data read/write speed, TBW, and most of the things. Considering the current market price Samsung 970 EVO Plus, 250GB & 500GB variants are available at a lower value compared to 970 EVO. Moreover, there is no such massive difference in price comparing to other variants too.

So, when you opt for the 970 EVO Plus, you will surely get a bit higher speed. But, the difference is not that much. So, you can also go for a lighter version (EVO 970) and be satisfied with the performance as well. But, if you ask me, I would definitely go with the SAMSUNG 970 EVO Plus.

If this article has helped you, consider sharing it with others. Read more comparisons on SSD Sphere and always choose the right SSD.